On February 8, 2013 by Christina Rice With 0 Comments - Guest Blogger 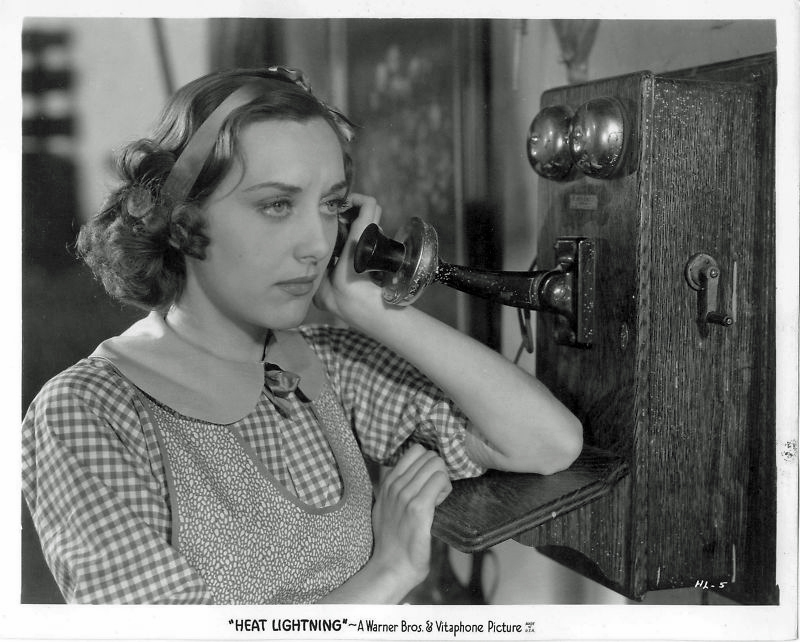 I am in the final stages of preparing the manuscript to submit to University Press of Kentucky. I have been contending with corrupted computer files and lost photos in the mail (weepy post on those to come soon), so I was extremely grateful to today’s gust blogger, Daniel Nauman, for a couple of reasons; 1) for taking care of today’s post, so I can concentrate on getting the damn thing done, and 2) for referring to me as a Bettie Page lookalike. I haven’t heard that since pregnancy and thyroid cancer wreaked havoc on my body, so you’re a saint in my eyes Daniel!

I am also thankful to Daniel for making my job extra super easy by uploading his Ann Dvorak post to his own blog, The Strange Loves of Daniel Nauman. So, if ya don’t mind, I am now gonna send you on over to Daniel’s site, as he talks about what the Divine Miss D means to him.

To wrap things up, here’s a bit about Daniel in his own words:

I’m an artist once and a writer now in the wilds of the Mother Lode. Interests include all Californiana—especially roads and radio—and my Rosa giganteas at our Rancho Notorious. I have about a half dozen novels overloading my mental hard drive—and I’m exploring daily observances, my past and the spirits of the past untold in my new blog The Strange Loves of Daniel Nauman.

On February 7, 2013 by Christina Rice With 3 Comments - Guest Blogger

I am really jazzed by today’s guest blogger submission. You may recognize Paul Petro as “artman2112,” who is a frequent contributor to the comments sections on this site.Â  When he told me he was planning on turning in a guest post, I was fully expecting something about Bright Lights, which costars his personal favorite, Patricia Ellis. Instead, he sent along this gorgeous portrait of Ann which is “grahpite and white pastel pencil on approx 13″ x 17″ tinted canson paper.” Mind you, this was not a piece he had laying around from a couple years back, but something he created over the past two days specifically for The Year of Ann Dvorak. This is exactly why I love the idea guest bloggers, because you never know what they’re going to come up with. (I also need to credit frequent commenter DickP with coming up with the guest blogger idea.) It’s also a credit to Ann that she can inspire such devotion in a few of us die-hard fans.

If you want to check out more of Paul’s work, take a look at his website. If you’re interested in being a guest blogger sometime in the next few months, please let me know. Now, here’s a bit more about Paul in his own words:

I’m a 45 year old self taught artist living the quiet life in Vermont. I make pictures with pencils, plain or colored. I like to draw women. When i’m not drawing i like to play guitar, make things out of wood, watch old movies, lift weights, pet my little kitty, and eat -especially Italian food, a good steak, chocolate cake, cheesecake or ice cream.

I collect vintage movie paperware and classic movie star autographs and have them hung all over my house along with prints from my fave artists and my own work too of course. i love books. i love old cars, especially the American muscle cars of the 1960’s. I stay up too late, always over sleep and i’m always hungry.

On February 6, 2013 by Christina Rice With 1 Comments - This Day in History

In August of 1931, Ann Dvorak signed a long-term contract with Howard Hughes’ Caddo Company. This pretty much meant that she would be employed by them for a certain number of years, granted they didn’t drop her, but exercised the many options that came up. After strong performances in the Caddo-produced Scarface and Sky Devils, Hughes decided to hang onto Ann by extending her option by three months on February 6, 1932, along with giving her a modest bump in pay to $250 per week. By this time, Hughes had already launched into an exclusive loan-out deal with Warner Bros. that soon became permanent. Ann would not make another film for the Caddo Company.

On February 5, 2013 by Christina Rice With 4 Comments - This Day in History

My single favorite Ann Dvorak scene comes early on in The Strange Love of Molly Louvain. Lower-class Molly (Ann) has just been jilted by her well-to-do beau and is drowning out her sorrows in Leslie Fenton’s hotel. She’s depressed, drunk, and belting out a scat version of “Penthouse Serenade” while tickling the ivories. I actually posted a You Tube clip of the scene a few years back, but unfortunately it got pulled at some point.

The scene ends with Ann singing a playing a little ditty you probably never heard of called “Gold Digger Lady.” Ann penned the song herself and because it appeared in the film, they needed to get her official permission to use it and did so with an agreement drawn up on this date in 1932. I don’t believe she actually got any extra compensation for this and I don’t know if she slipped it in the film without their initial knowledge. Either way, it’s a great cap to a great scene in a decent pre-Code film.

On February 4, 2013 by Christina Rice With 5 Comments - Guest Blogger

Today I bring you the first post from a guest blogger. What? You didn’t seriously think I was going to be able to keep this up EVERY day for a year, did you?

Guest Blogger #1 is Mary Mallory, a writer and film historian. She wrote the Arcadia Publishing book “Hollywoodland” in 2011 and blogs for the LA Daily Mirror on Los Angeles and motion picture history. Mallory serves on the board of Hollywood Heritage and on the Cultural Affairs Committee of the Studio City Neighborhood Council.

Just to set-up Mary’s post: When Ann returned from her eight-month European honeymoon in March of 1933, which Warner Bros. did not approve of, she needed someone to smooth things over while still getting her a decent contract deal. Myron Selznick was the man she turned to.

Ann Dvorak made the leap from chorus girl to star in 1932 with her appearance in Sky Devils, cemented by her electrifying turn in Scarface. Being a star required having a strong agent to look after your interests, both regarding salary and casting.

Dvorak found that in Myron Selznick, a tough, savvy former producer and studio executive. Selznick, the older brother of David O. Selznick, represented such Warner Bros. stars as Ruth Chatterton, Kay Francis, Constance Bennett, and William Powell. With his production background and take no prisoners attitude, Selznick was the perfect person to have in your corner, as long as you followed his rules.

Myron Selznick made the talent agent the ultimate power in Hollywood. He was the first to gain his clients the right to participate in choosing scripts and co-stars, as well as the first to package talent, gain profit participation for above the line people, and set stars up in independent production companies.

There was only so much an agent could do, however, if a client failed to follow instructions and obey general studio strictures or leave contract matters to the agency.

Selznick liked women with spunk, women with strong minds and opinions, but ones who knew how to make strategic moves. Ann’s impetuousness sank her prospects at Warner’s, something even an agent as powerful as Selznick could do little to rectify.

Much appreciation to Mary for the excellent post and for stepping up as the first Guest Blogger. Also, for giving me the day off!

If anyone else out there is interested in contributing to the Year of Ann Dvorak, please let me know! My only requirements are that it somehow relates to Ann, reflects the personality of the author (Mary Mallory has been researching Selznick for years), and is fun for the author to do! After spouting off my opinions on Ann Dvorak for years, it’s great to hear other people’s perspectives.

On February 3, 2013 by Christina Rice With 5 Comments - Collection Spotlight

In all honesty, I am not a sports fan and everything I know about football (which isn’t much) comes from watching five seasons of Friday Night Lights. I didn’t even know it was Super Bowl weekend until I overheard some co-workers talking about it yesterday. That said, since today is the big game and I happen to own two lobby cards featuring Ann Dvorak AND a football, could there be a more perfect time to post these beauties from College Coach?

Enjoy the game (if that’s your thing)! I will be busy with Sunday brunch and a trip to the Griffith Park pony rides with my little one.

On February 2, 2013 by Christina Rice With 3 Comments - Collection Spotlight

This Three on a Match lobby card is one of the best pieces in my Ann Dvorak collection. It’s the only card I have from the film, which is my favorite Dvorak title. I won it in an eBay auction 11 or 12 years ago and paid around $110 which seemed extravagant at a time when I was a starving grad school student. The photo of this card was taken with the first digital camera I ever owned, which is why the quality isn’t great. There’s another card of Ann laying on the pavement after jumping out a building that I hope will one day join my collection and keep this card company. Until then, I will continue to marvel that I own a lobby card from Three on a Match.

Whatever You Do, Please Don’t Buy Me “Crooner” Sheet Music

On February 1, 2013 by Christina Rice With 3 Comments - Collection Spotlight

Anyone wanting to own a piece of vintage Ann Dvorak memorabilia should have no trouble finding sheet music from the film Crooner, featuring a lovely portrait of our fair Ann. In fact, there are two different versions of Crooner sheet music for the songs “Sweethearts Forever” and “Two’s a Crowd” which are played in the movie, over and over and over…and over. If two versions of Crooner sheet music aren’t enough, there are also Australian versions and maybe others!

I remember the first time I saw this sheet music. It was in my early days of collecting on Dvorak, and I was sure excited to find something with Ann featured so prominently. Then I came to realize how common sheet music is and over the years I have ended up with countless copies. I once was cleaning my car out and found “Two’s a Crowd” under the seat. No clue how it got there.Â  At this moment, there are at least 20 for sale on ebay and one joker is asking $12 for it. Don’t do it!! Just go to your local antiques mall a pick up one for a quarter. I used to kid around that I was going to wallpaper my bathroom with Crooner sheet music. I still might do it.

A few years back I was wheeling and dealing with a guy in Wisconsin who had a bunch of Ann stuff he was selling. Included on his list was sheet music from The Bachelor’s Daughters which I had never seen before and was really excited about. I ordered that along with a few other items and sent off the check. When the package arrived, there was no music from The Bachelor’s Daughters to be found, but instead one from Crooner. Included was a note stating that while I had ordered the other title, the Crooner music had such a lovely portrait of Ann that he thought I would enjoy it more. I still don’t have that Bachelor’s Daughters piece.

(All photos from www.ebay.com)