On October 21, 2013 by Christina Rice With 5 Comments - Collection Spotlight

Ann Dvorak only made one film at Paramount during the pre-Code era, which is too bad because the lobby cards from this time period are gorgeous. There’s something about the color tinting and border graphics that just pop out. Here are the two cards I have for the 1933 featureÂ The Way to Love co-starring Maurice Chevalier. The one above of Ann in full biting mode is one of my favorites and I plan on having a blow-up of it on display at the book launch party on November 12th.

Ann is on at least one other card from this set, so fingers crossed that it joins these two in the near future.

On October 20, 2013 by Christina Rice With 0 Comments - Collection Spotlight

I am probably more impressed with my modest Anna Lehr collection than anyone else. Lehr was Ann Dvorak’s mom and Â a film actress for roughly a decade starting in 1912. Every now and then I come across a piece of memorabilia from one of Lehr’s films like this lobby card fromÂ A Man Without a CountryÂ starring Arnold Daly.

The film was based on an 1863 short story of the same name by Edward Everett Hale. Curiously, most of the time this 1918 movie is credited as being calledÂ My Own United States so I am not sure if this card is from a re-titled subsequent release.

Lehr is around twenty-eight in this photo and think traces of Ann are definitely visible.

This Day in Ann Dvorak History: “People Like Us” Does NOT Open at the Court Theatre

On October 19, 1949, a staged version of Â People Like UsÂ was slated to open at the Court Theatre in New York City. The play, written by Frank Vosper, was to star Ann Dvorak and Sidney Blackmer as real-life accused British murderersÂ Edith Thompson and Frederick Bywaters. Unfortunately, an inexperienced and corrupt producer, along with some bumpy previews in Canada caused the production to fold before it made it to Broadway. The experience was so traumatic that Ann Dvorak swore off live theater permanently.

I actually go into a great amount of detail aboutÂ People Like UsÂ  in the book. So yeah, 300 days into the Year of Ann Dvorak and less than three weeks away from the book release and I’m getting a bit lazy here, but thanks for sticking around!

On October 18, 2013 by Christina Rice With 4 Comments - Collection Spotlight 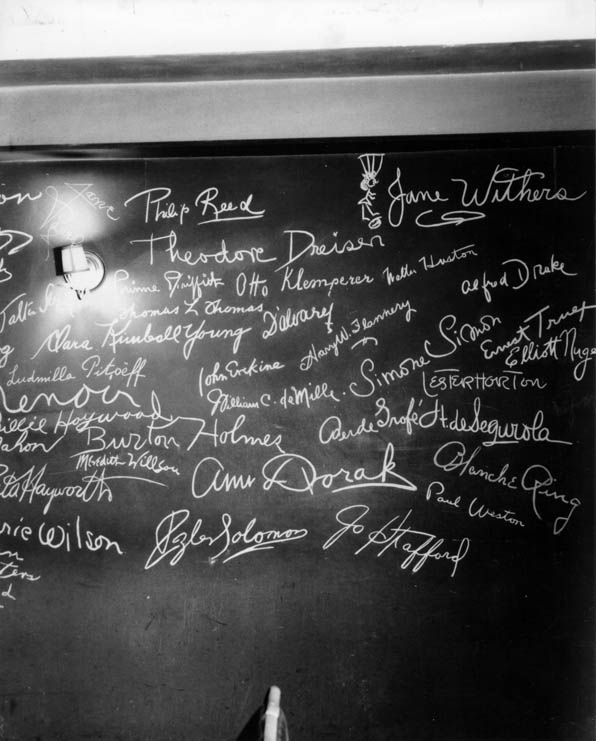 The photo collection I oversee is massive and is comprised of many collections, one of which includes photos from the Turnabout Theatre. 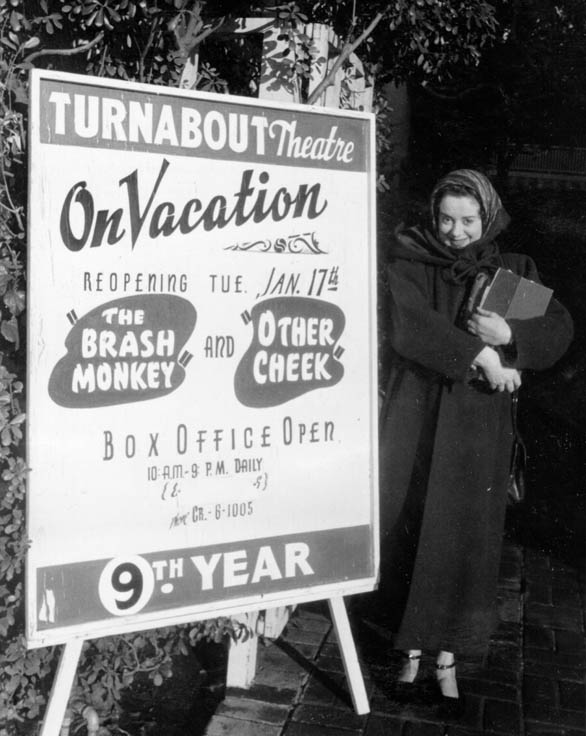 The Turnabout was a live performance/puppet theatre which operated in Hollywood from 1941-1956. It was run by Forman Brown, Harry Burnett, and Richard Brandon aka the Yale Puppeteers and got its name from the audience seats which could be “turned about” to view the puppet stage at one side of the theater and the human performers on the other side. Elsa Lanchester (above) was the most notable member of the troupe and talks about the Turnabout with great affection in her autobiography. 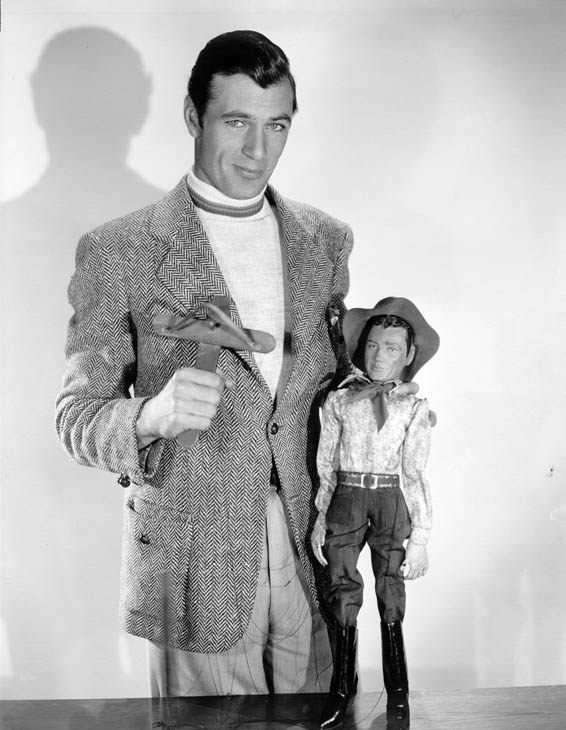 Celebrities could frequently be spotted at the theatre and the puppeteers would even make puppets in their likenesses, such as Gary Cooper or evangelist Aimee Semple McPherson (this is one of my favorite photos in the collection) . 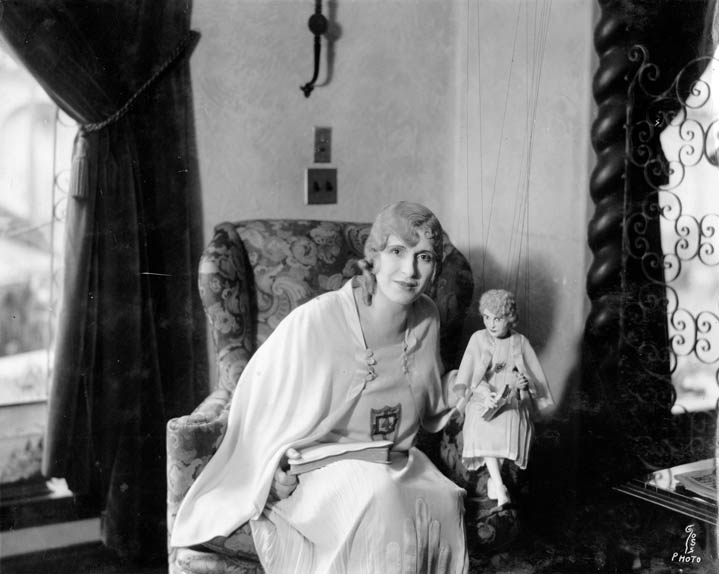 No, I don’t think there was ever an Ann Dvorak puppet. However, the theatre had a large blackboard which the celebs were invited to sign. Back when I interned at the LAPL Photo Collection in 2004, I watched a documentary about the Turnabout which flashed the photo at the top of this post. “There’s Ann Dvorak’s signature!,” I shrieked to my cat who was the only other living thing in my apartment. Â She was not nearly impressed as I was, but even all these years later, I am still tickled that Ann Dvorak visited the Turnabout Theatre.

It’s also worth noting the Turnabout’s place in L.A.’s LGBT history. In 1933 Yale Puppeteer Forman Brown penned the novelÂ Better Angel, under the pseudonym Richard Meeker. The bookÂ Â is now regarded as one of the earliest works of fiction to portray a gay lifestyle in a positive light.

All photos from the Los Angeles Public Library Photo Collection. The entire Turnabout collection can be searched here with great difficulty (we’re working on it).Â

Collection Spotlight: “I Was an American Spy” One-Sheet

On October 17, 2013 by Christina Rice With 2 Comments - Collection Spotlight

TheÂ Â I Was an American SpyÂ Â one-sheet is an easy Ann Dvorak poster to disregard, at least for me. It’s not a rare poster – there’s three of them on eBay right now. There are so many copies of this thing floating around that it was the first large piece of Ann paper I ever obtained, sometime around 1998. So, not only is it something I have had long enough to take for granted, but it shows up so often that it’s kind of a bore to see.

However, when you really stop to look at it, the poster does have its merits. This is one of the few films where Ann Dvorak was the bonafide star, meaning it’s also one of the few posters that focuses on her. How could we not love that giant brooding Ann head? While running into this one may be yawn-inducing for an Ann Dvorak collecting snob like me, it’s a piece of Ann that’s easy to find and affordable for someone wanting some vintage memorabilia. I paid $20 for this poster 15 years ago and you should not pay much more.

Finally, any paper with Ann Dvorak on it is worthwhile, so that’s really reason enough to celebrate theÂ I Was an American SpyÂ one sheet.

Once Ann had her fill of Brentwood, covered in yesterday’s post, she got even more ritzy and moved to Beverly Hills. The house at 1514 Schuyler Rd was a spacious and gorgeous Spanish style residence, though Ann soon decided she preferred beach life and purchased an additional home in Malibu. However, she held on to the Schuyler Road house, opting to rent it out.

Apparently Ann, or probably a property manager, didn’t take any time to vet the tenants. While she was vacationing in Europe in the spring of 1951, the LAPD conducted a major vice raid at 1514 Schuyler Rd, where according to the Los Angeles Herald, “Here, film stars and wealthy players cavorted in the nude with beautiful ‘partygirls.'” Â Five woman and six men were arrested for illicit activities.

I’m not going to go into too much detail here, since the incident is covered inÂ Ann Dvorak: Hollywood’s Forgotten Rebel. I will say that Ann was not implicated in any goings on at her home, and that she was amused to hear aboutÂ Â what the HeraldÂ described asÂ “the fabulous ‘purple room’ with king-sized bed and exquisite decorations. Rates here ranged as high as $150 for a ‘double-header’–two girls with one rich customer. In a ‘lower trade’ room–the red room–rates were as low as $20. Autographed photos of big-name film stars were found in ‘purple room.'”

The house is still standing, though I bet the current owners are as clueless about the Schuyler Road Whorehouse Incident as Ann Dvorak was!

All photos from the Los Angeles Herald Examiner Collection/Los Angeles Public Library. The full set of photos can be viewed here.

When Ann Dvorak and Leslie Fenton split in 1944, they both ended up as far from ranch life as possible. Fenton quickly took up residence in Beverly Hills and once Ann subdivided the property and sold the actual house to singer Andy Russell and his wife Della, relocated to Brentwood. The house, located at 12319 19th Helena Dr. was actually much larger than the structure in Encino, though it resided on a fraction of the land. Ann would live here a handful of years, and when she tied the knot with husband #2 she did so in this house.

In 1946 photographer Maynard Parker shot the house for a small feature inÂ Better Homes and Gardens entitled “Ann Dvorak Lives Simply.” Amazingly, when Parker’s archive was donated to the Huntington Library, the photos of 19th Helena were in the collection and can be viewed here. I’ve not been in this house, but I would be very surprised if the interior bears much resemblance to when Ann lived there.

If you’re thinking this address sounds oddly familiar for some reason, it may be that in the early 1960s, Marilyn Monroe purchased a house not too far away at 12305 5th Helena Dr. which is also where she passed away in 1962.

Today’s post is going up a bit later than usual, but I knew this interview would be popping up on the TCM Movie Morlocks blog and wanted to hold off and feature it.

Susan Doll is an author and Â film scholar whose posts on the Morlocks blog are some of my favorites. She was kind enough to give me some advice when I was filling out the publisher’s marketing questionnaire, and then performed the extremely generous task of reading an advanced copy of the book and providing a pull quote.

I hope you enjoy the interview which features a largely different set of questions than yesterday’s piece over at Immortal Ephemera.

Christina Interviewed About Ann Dvorak Over At Immortal Ephemera

The first of, hopefully, many interviews aboutÂ Ann Dvorak: Hollywood’s Forgotten RebelÂ  has been posted over at the Immortal Ephemera website. Cliff Aliperti runs the site, along with a fantastic tribute site to Ann’sÂ Three on a MatchÂ co-star Warren William. Cliff has been a strong supporter and promoter of the Ann Dvorak project for a very long time now, and was a sounding board for my whining during the two-month negotiations for Ann’s personal possessions earlier in the year. I am thrilled to be given so much real estate on Immortal Ephemera today and truly appreciate Cliff’s enthusiasm for this book. One of these days he’s going to dig up a piece of Dvorak memorabilia I don’t have that I can buy from him!

The full interview can be read here.Â

Around three weeks ago, I reported thatÂ Ann Dvorak: Hollywood’s Forgotten Rebel had an official record in the Library of Congress catalog, which is still viewable despite the government shutdown. Now, I am pleased to report that the book has it’s first public library record which is in the Los Angeles Public Library’s catalog. Just to add some icing to this cake, four people have placed a hold on it.

Full disclosure – I work for LAPL though I honestly did not hit up anyone in the Cataloging Department to create this record, so it was a pleasant surprise to see it pop up so soon. I am not sure if all authors are this thrilled to see their books in library catalogs, but as a librarian it is a pride inducing moment and I look forward to seeing the book show up in more institutions.