Blind Alley was one of three movies Ann Dvorak filmed at Columbia in 1939. Based on a play by James Warwick, the story involves an escaped convict (Chester Morris) who, with his gang, takes over the lakeside home of a psychology professor (Ralph Bellamy) and holds the family hostage while waiting for a getaway boat. Dvorak is Morris’ devoted gun-toting moll.

This psychological drama is far less gruesome than the play it was based on, and it’s sometimes a bit hokey when taking us into the troubled psyche of a hoodlum. That said, it’s still one of my favorite Ann Dvorak films of her post Warner Bros career and I have watched it many a time. She looks stunning and it’s not often she had the chance to play a character with such a nasty streak. Chester Morris is a favorite of mine (loved him in The Big House), so it’s great Ann got to play dame to his thug. Blind Alley was remade a few years later as The Dark Past with William Holden and Nina Foch.

I can’t recall the last time Blind Alley was aired on TV, so this one is not to be missed.

This Day in Ann Dvorak History

On Wednesday March 16, 1932, Ann Dvorak wrapped up shooting on Love is a Racket and was allowed to leave Warner Brothers early. The next morning she hopped a plane to Yuma, Arizona and by the afternoon had become Mrs. Leslie Fenton. The couple then traveled to Agua Caliente, a resort in Tijuana, Mexico for a brief celebration. When reports started surfacing that a small plane had crashed near El Centro, the worst was feared, but the happy couple finally arrived safe and sound back in Los Angeles by night’s end.

Dvorak had briefly met Leslie Fenton on New Years’s Eve and a month or so later was cast opposite him in The Strange Love of Molly Louvain. At the time of their nuptials, the couple had known each other less than three months. Fenton was ten years her senior and had walked out on a very promising film career in 1929 in order to travel abroad. Three months after their wedding day, he would convince his impressionable bride to do the same, irritating her bosses at Warner Bros who had just finalized the purchase of her contract from Howard Hughes.

Although Dvorak returned to Warner Bros in mid-1933 and would act in films through 1951, the momentum her film career had in 1932 would never be equaled. While a European honeymoon sounds dreadfully romantic, I sometimes cannot help but rail at Leslie Fenton and his influencing Ann to thumb her nose at the Brothers Warner. Who knows what film roles she would have gotten had she just played nice for a couple of years! As for the Fenton union, it would last until 1946 when the divorce was made final after a two year separation.

This concludes This Day in Ann Dvorak History.

I received my Forbidden Hollywood Collection, Vol 2 in the mail late last week and immediately viewed the original documentary Thou Shalt Not: Sex, Sin and Censorship in Pre-Code Hollywood. In 2003, TCM produced another pre-code documentary, Complicated Women, which was excellent but did not mention Ann Dvorak other than flashing a quick film clip. I was expecting more of the same with this recent offering, and was pleasantly surprised when her performance as the doomed Vivian Revere in Three on a Match was singled out and commented on by author/photographer Mark Vieira and director John Landis. Also featured are a couple of clips from The Strange Love of Molly Louvain. Since the hits on my website more than doubled after Thou Shalt Not aired, it looks like this box set is going to introduce a lot more fans to Miss Dvorak.

The print of Three on a Match on the set is great. Looking forward to watching the rest of the films on this one. 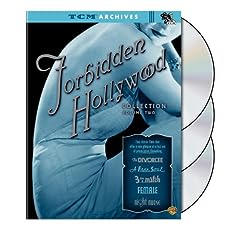